One of the great pleasures of coaching is giving jubilant speeches in the locker room after big wins.

One of this profession’s great challenges is addressing your team after heartbreaking losses.

Some coaches put two cards in their pocket, one with speech notes for if you win and one for if you lose. That way if they’re overwhelmed or disappointed, they won’t go into the locker room and tank. But I never wrote notes. I just tried to be spontaneous and say exactly what I felt at the time.

In 2006, we defeated USC in the Rose Bowl, which served as that year’s national championship. With 6:42 left in the game, we trailed USC by 12 points, so I wasn’t exactly planning a post-game victory speech. Even after launching our comeback and taking the lead 41-38, we kicked off to Reggie Bush with 19 seconds left, so I knew nothing was guaranteed until the final whistle blew.

On the last play of the game, USC quarterback Matt Leinart’s throw to Dwayne Jarrett was incomplete, and instant chaos broke out on the field. 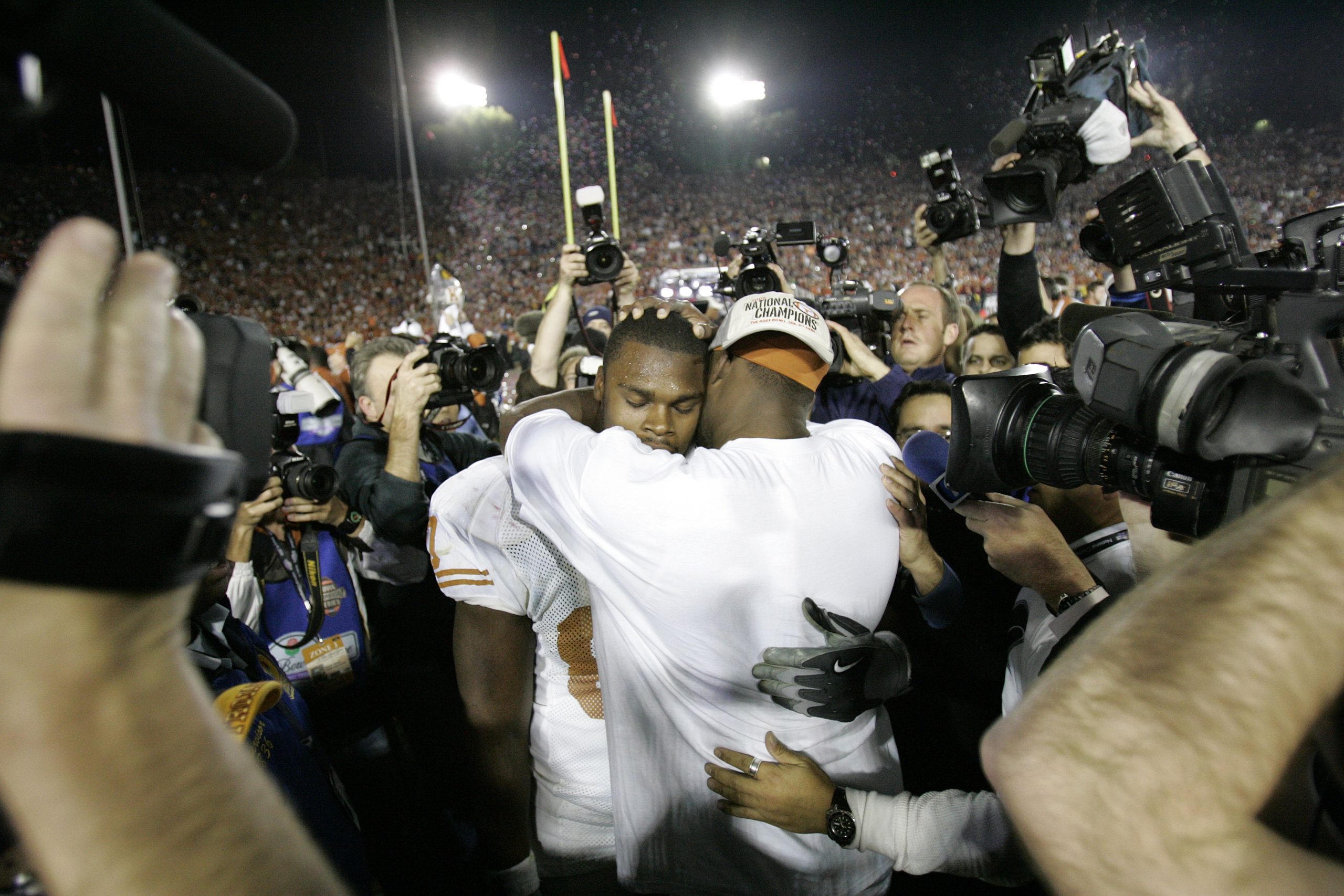 My first thought was to find USC head coach Pete Carroll and shake his hand.

“It’s always tough to lose a championship game,” he said when we finally found each other, “but when you lose to a champion like Texas, I can handle it. Congratulations, you’ve got a great team.”

Then we sang the Eyes of Texas with all the fans and hoisted the crystal ball in the air. It was so much fun to see 60,000 Longhorns so happy and so proud to have won the national championship for the first time in 35 years.

I said, “Miss Edith, don’t fall off that ladder,” but I couldn’t help smiling.

It was with those happenings and emotions in the background that I walked into the dressing room and saw all my players. Everyone’s family was there, alums, even Matthew McConaughey, Lance Armstrong, and Rex Linn.

What do you say to a group that just won the national championship for the first time in 35 years? 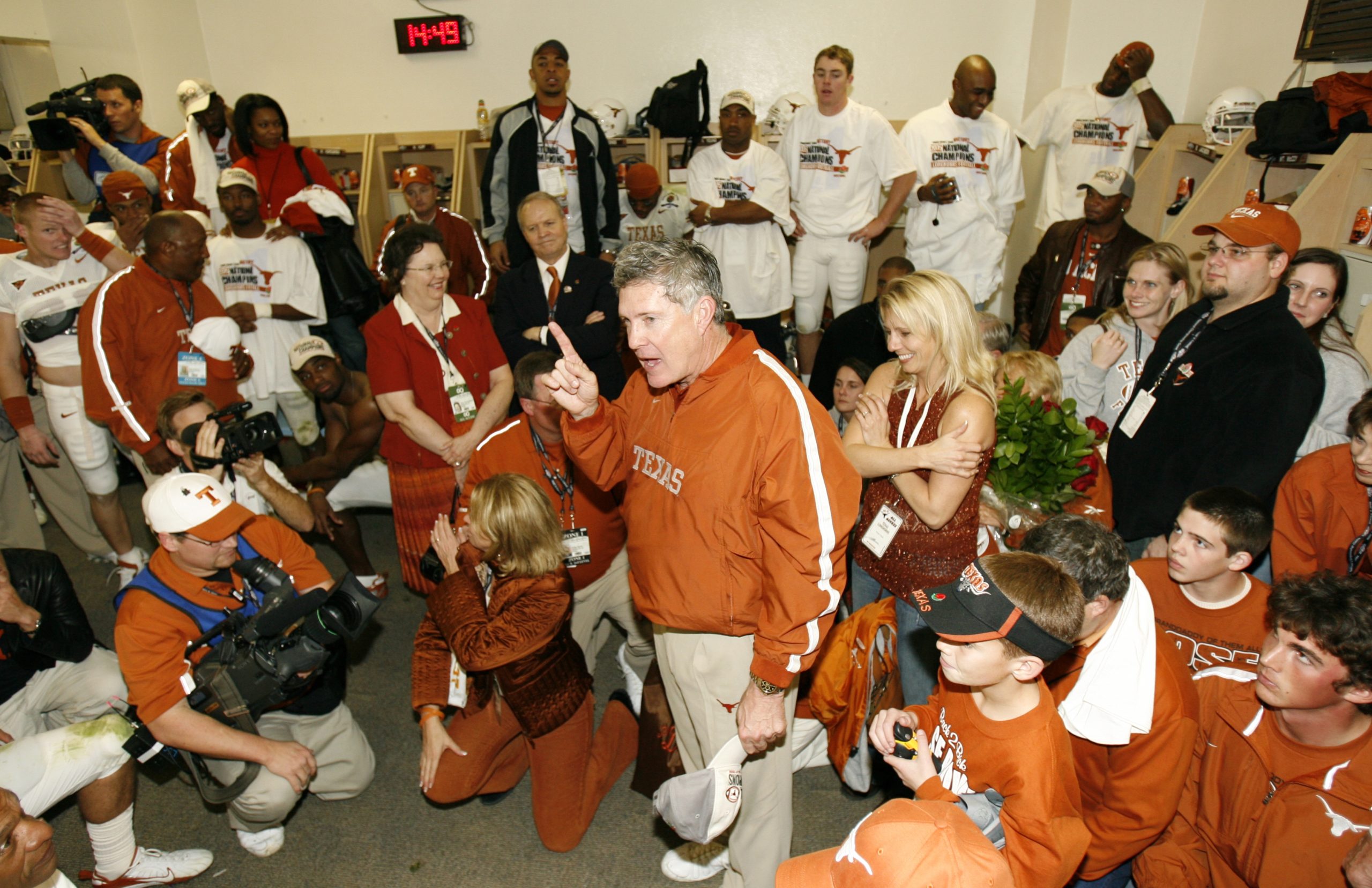 I decided the most appropriate thing to do would be to say thank you. Thank you from your parents and your coaches and the staff and the administration and the faculty. This is fun, and you all made it happen, and we appreciate it so much.

Then I said, don’t get in trouble. Don’t spoil this wonderful moment in your life with something bad. And finally, I said, don’t let this be the best thing that ever happens in your life. It’s the best thing you can do in sports for this year. We can only win the national championship and be the best team and you’ve done that. So congratulations. But for the seniors, I said, take this as an opportunity to be a better father and a better husband and a better person in the community.

The guys just looked at me like I was crazy when I said that, but 12 years later when we see each other they all show me pictures of their wives and kids and they say, “I finally understand what you were talking about in the locker room after the game.” 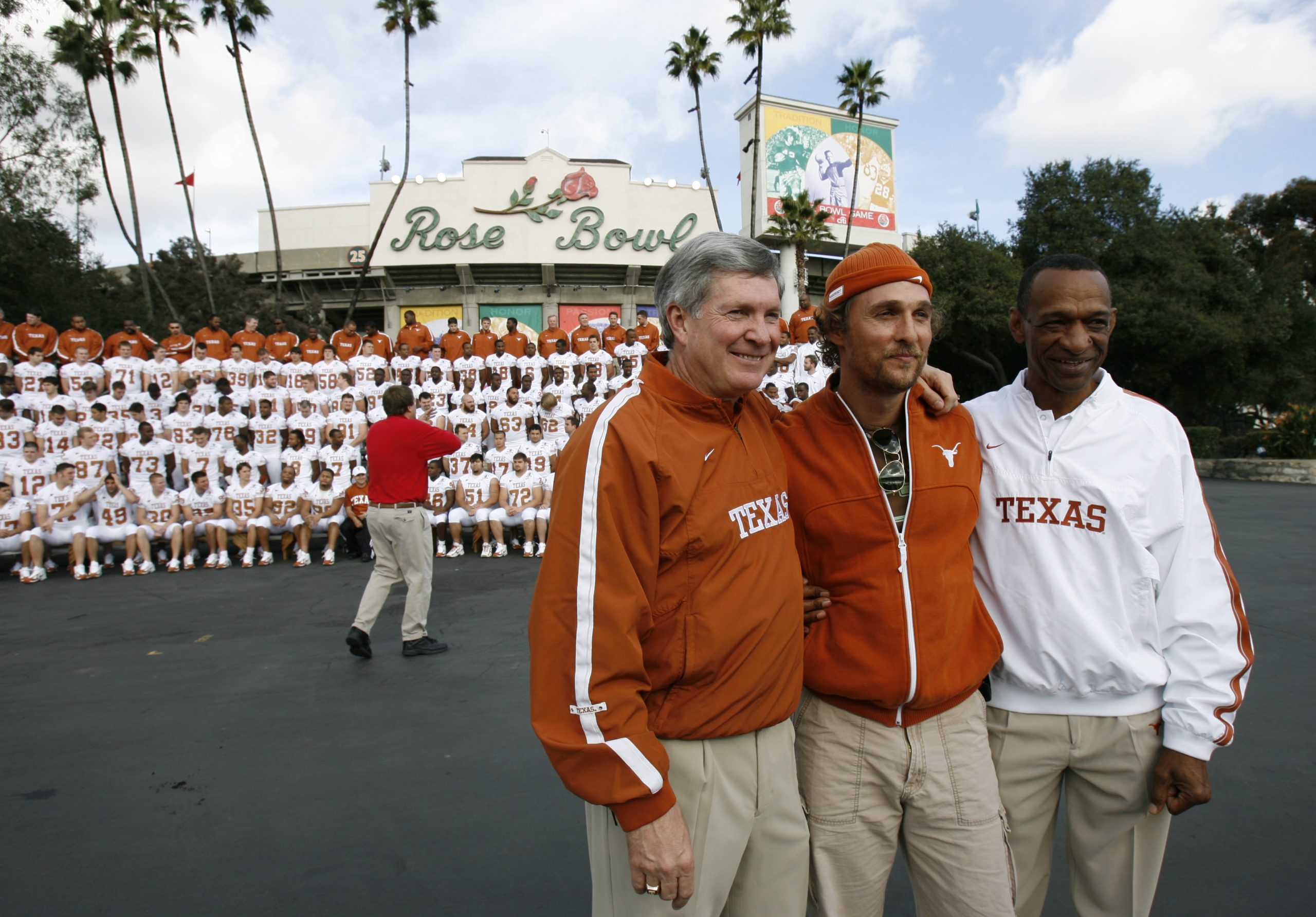 Four years after that 2006 victory, we made it back to the national championship. Our quarterback Colt McCoy had made such a name for himself. In 2008, he led the team to a 12-1 record and a defeat of Ohio State in the Fiesta Bowl. Heading into the championship of the 2009 season, he had won more games than any other college quarterback. As a senior, Colt was a unanimous first team All-American, won the Davey O’Brien, Manning, Maxwell, Unitas, and Walter Camp Awards, and was a finalist for the Heisman Trophy for the second year in a row.

The only thing he didn’t have was a national championship. 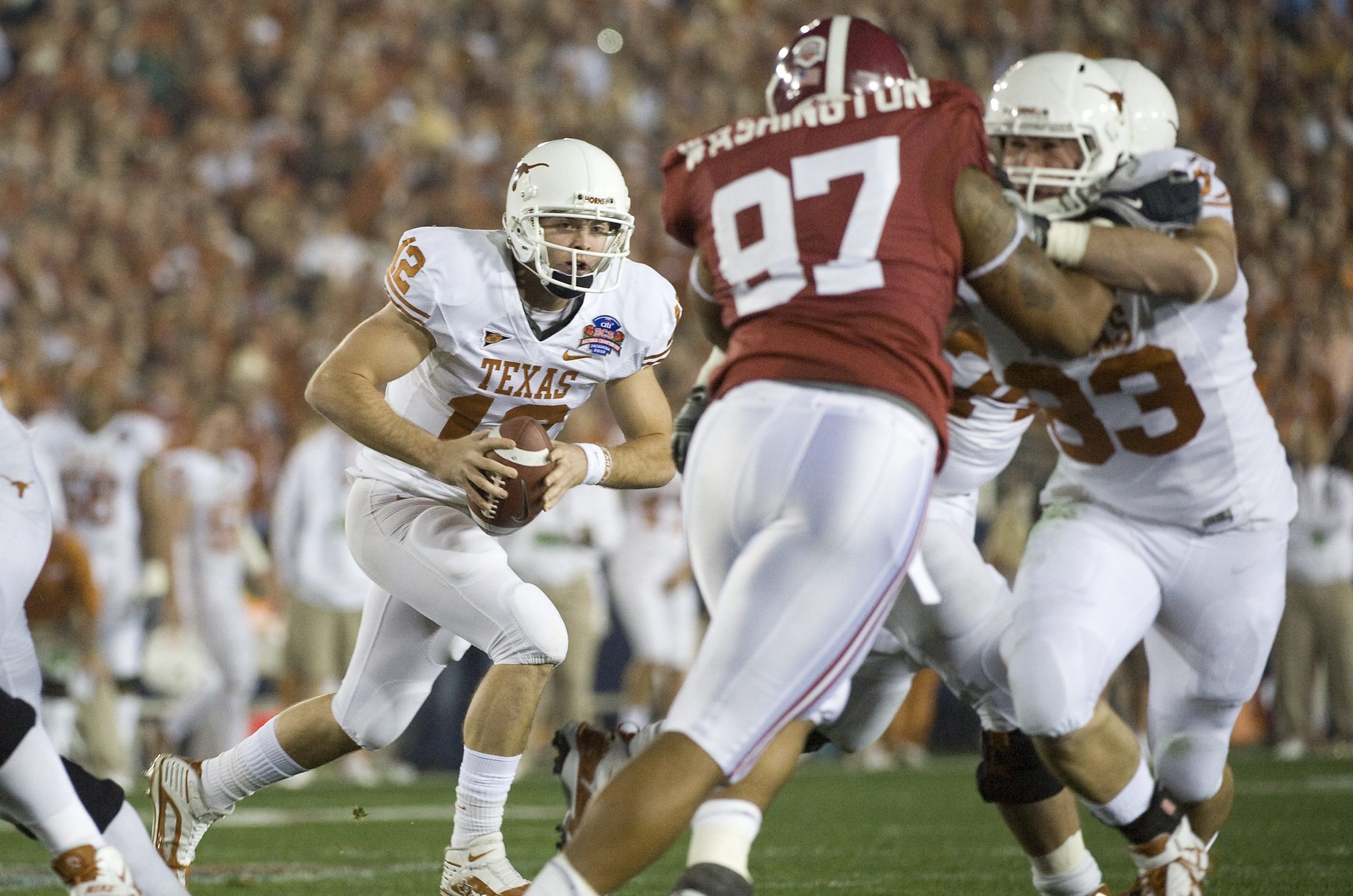 The game versus Alabama started off great. They won the coin toss and elected to receive the kickoff, but we forced a three-and-out and intercepted the Bama punter when they faked the punt. We began our offensive push, but on only the fifth play, Colt went for a QB option and got tackled, pinching a nerve in his throwing shoulder.

Our backup quarterback Garrett Gilbert didn’t even have his helmet on. It was sitting under the bench. He wasn’t planning on playing a second of that game. We had to call a timeout just so he could suit up and settle down.

At half time, Alabama had a 24-6 lead and it was clear Colt wasn’t going to be able to get back in the game. He couldn’t even lift his arm. Couldn’t throw the ball across the room. We told the guys, “All of you play better to help Garrett.”

To Garrett, I said, “It’s yours, so go for it. You’re going to be the quarterback for next year, so just get it started right now. You’ve won a state championship. You were the No. 1 player in the country. You know what to do. Just be you and don’t try to do too much.”

I knew I needed to say something to Colt, too, and that was harder.

I said, “Look at what you’ve accomplished. You’ve won more games than anybody else in college football history. You’ve been a great representative for us and you’re a role model to so many young people. You and I need to step up now and show people how you handle trouble in your life. You handle the good days and you handle the bad days, and you take crisis and turn it into a positive.” 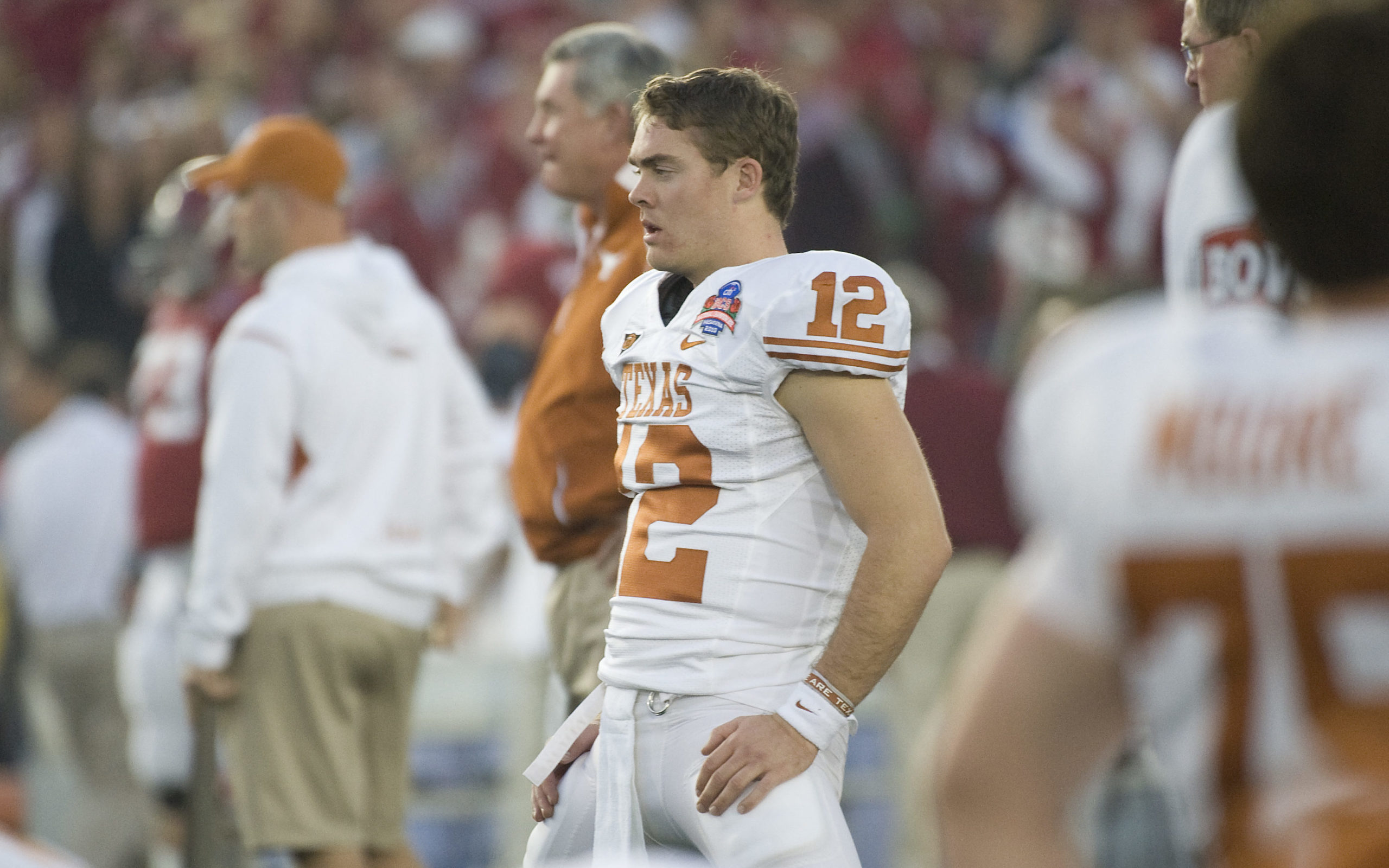 Then I said, “Go coach Garrett. Guide him and lead him.”

And Colt did. In fact, one of the reasons I think we got back in the game was because Colt was a leader for the entire offense on the sideline.

Garrett had some bad luck. He had a little shuffle pass that bounced in the air and got intercepted by a defensive lineman and run back for a touchdown just before the half. He got us within three points, but then they sacked him, forced a fumble, and got a couple more interceptions. Alabama won 37-21.

In the locker room after the game, it couldn’t have been more different from the scene four years prior. Everybody was hurting so much and they were waiting for me to make sense of it all. This team had lost very few games and had never lost a game of this magnitude. They had won the bowl game the year before and beaten Oklahoma and A&M both years. 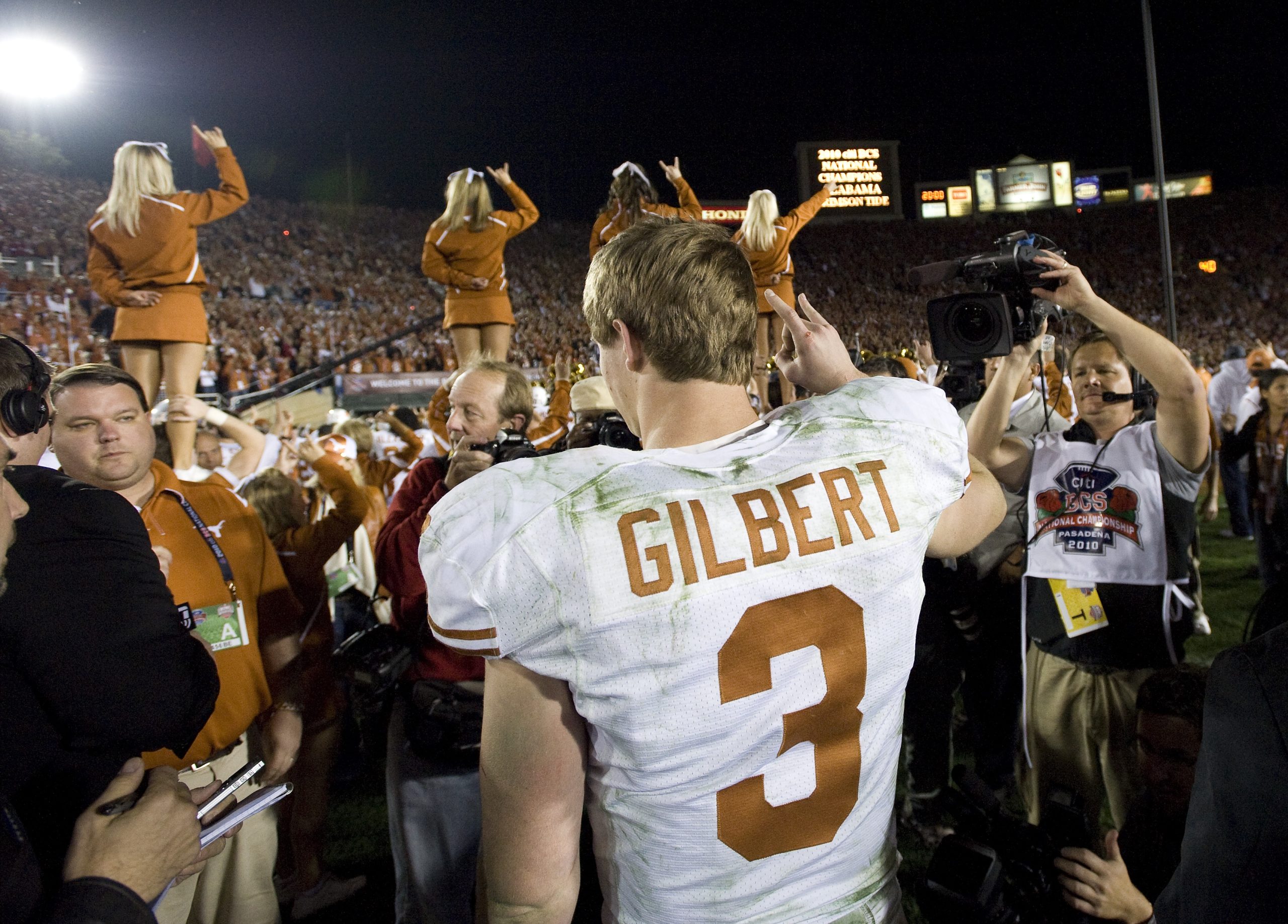 “I know how disappointed we all are in losing the national championship game, so let’s get that out,” I said. “It’s not good. We don’t like it. I’m not going to sit here and say, it’s ok. It’s not. But let’s be fair with each other. We’re going to have to pull together and help each other through this.”

And then I said, “The thing I take away from this group of young men and this staff is that we were in bad trouble at half time. We lost an All-American quarterback, and we came back and fought our guts out to get back in the game and had a chance to win in the end. That’s what this program is all about.”

But I didn’t handle things as well as I could have after that game. It’s so hard to get there and it’s so hard to win once you’re there. Being second in the national championship is no fun. You didn’t achieve what you came to accomplish.

I don’t remember all the things I said afterwards, but I know didn’t give that team the credit that they deserved. And I hate that still today. I try to say publicly every chance I get how proud I am of that team, what they accomplished and the way they fought. 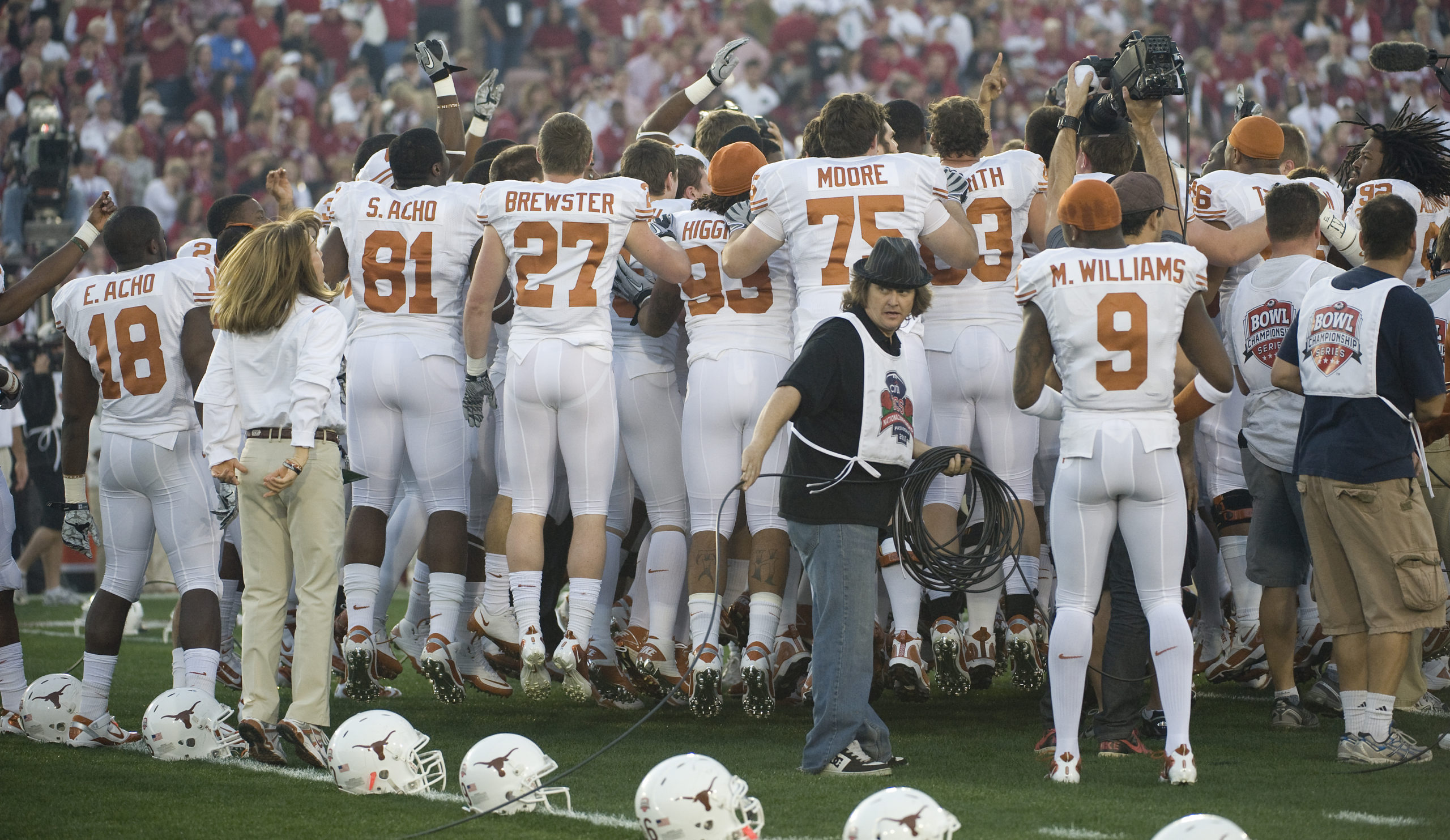 Looking back at my time at Texas, I remember the games we lost a lot more than I remember the games we won. You just feel like you let everybody down. You let the team down. As a head coach, you let your assistants down. There’s a certain amount of depression that goes along with a loss, but you can only have it short term because you don’t have enough time to pout. You’ve got to get ready to go back to work the next day.

I’ve tried to take my own advice and never let what happens on the football field be the best that happens in my life. In any given year, I had 130 players on the team and only 22 of those guys were starters. Sure, the goal was to win a national championship, and one incredible season, we did that. But every single year, no matter our record or what happened in the last game of the season, another one of my goals was always to have players leave my program better prepared for life than they were when they came in.

Having had some hand in a player’s success and happiness, now that I’m willing to call one of the best things that’s happened in my life. 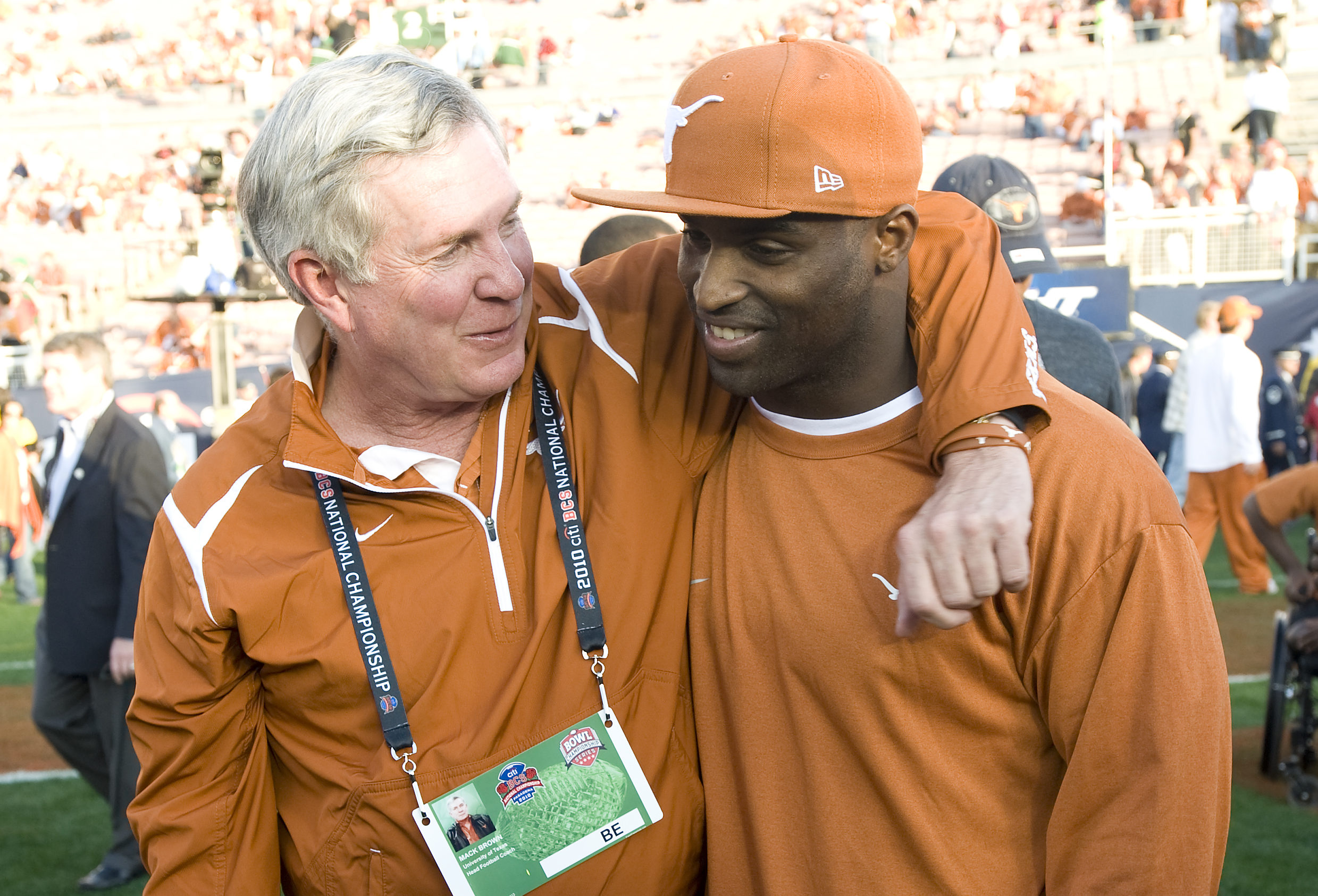 Mack Brown served as the head football coach at the University of Texas from 1998 to 2013, accumulating a 158-48 record over those 16 seasons. Brown’s coaching career also includes stints at Appalachian State, Oklahoma, Tulane, and North Carolina. Earlier this year, Brown was inducted into the College Football Hall of Fame. Today, Brown works for ESPN as a college football studio analyst.