It was never my dream to go to the Olympics.

And yet, up until the end of college, being a pole vaulter, a track and field athlete, was my identity. 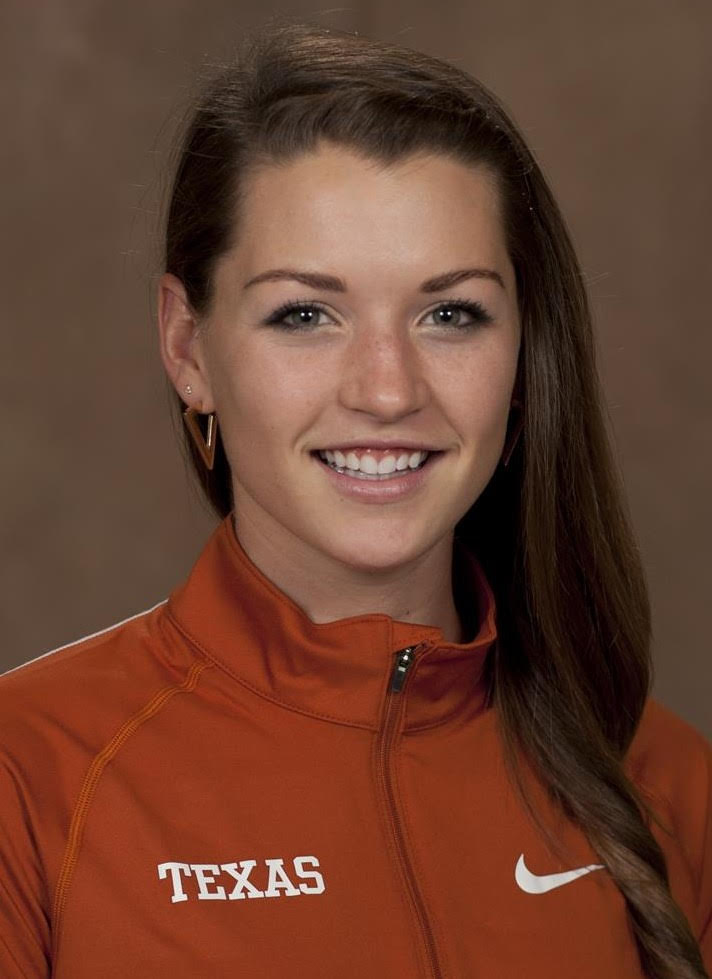 As such, when I graduated from the University of Texas and therefore ended my track and field career, I plunged deep into an identity crisis. Even though I had never had professional or Olympic aspirations, I had also never thought about not being a track athlete.

This is a familiar story. We hear the same tale from former NFL and NBA players who retire in their early 30s and then have a whole life to live after sports. But we don’t often think about how college athletes, and in some cases even high school athletes, go through many of the same things.

I started running in elementary school. My dad worked in the oil pipeline industry and I moved around a lot as a kid between Texas, Kansas, and Missouri. Every time I got to a new school, running helped me crack into established friend groups, and because of that it started to become the source of my identity. I was that new girl who was good at running.

I also always knew that I would go to college for track. I was the first person in my family to go to a four-year college, and we didn’t have a lot of money, so a track scholarship was the way to get there.

I ran cross-country and track and tried just about every field event and running event. I ended up competing in the pole vault my junior year in high school and was recruited to Texas as a heptathlete and a pole vaulter.

When I got to Austin, I was in awe of everyone else on the team, but at the same time, I realized that I was right up there with them, competing hard in practice, keeping up in workouts, performing at meets. My freshman year, I vaulted 13-9.25, which marked the second-highest height in UT outdoor track history. My third season, I won the pole vault title at Big 12s—the first woman to ever do so at UT—and then in my fourth year I broke my own record and finished in the top 10 to earn second team All-America honors at NCAA Championships. 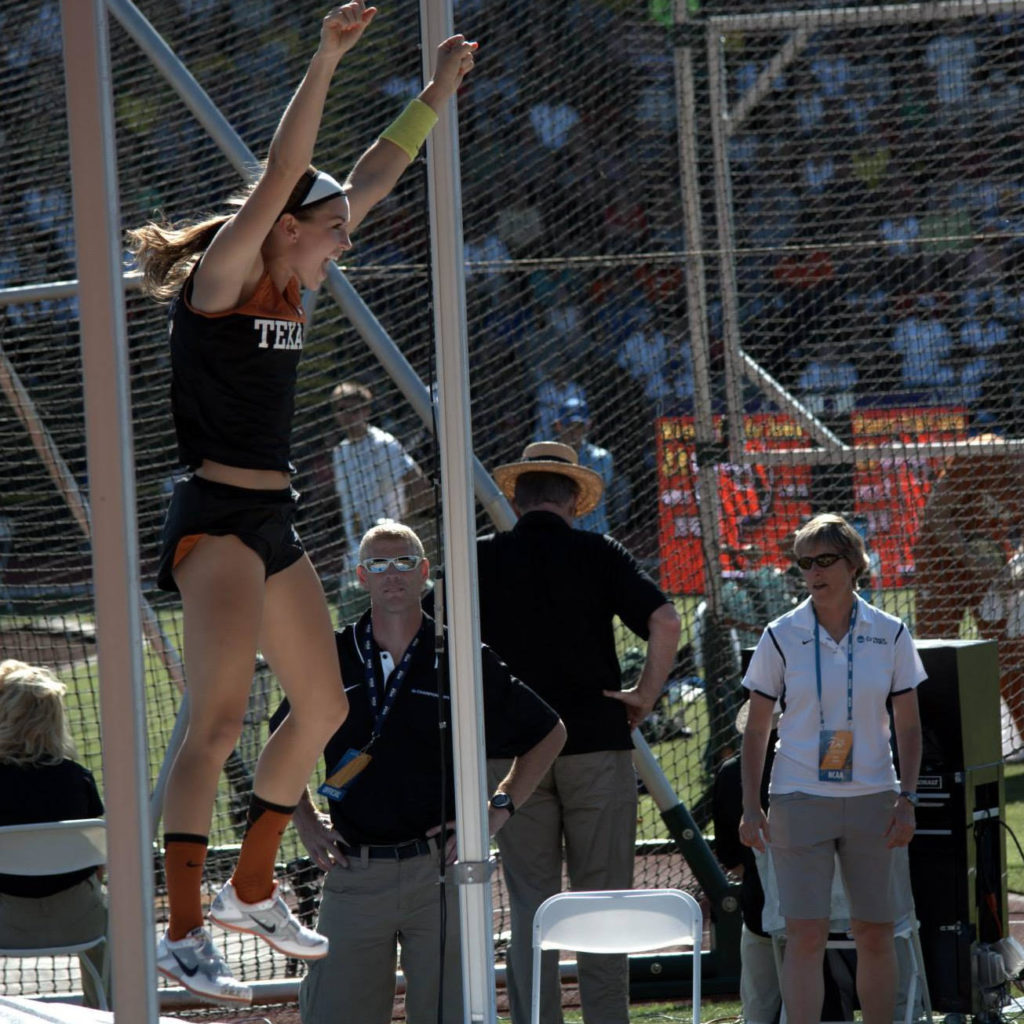 I detail those accomplishments not to brag, but because that success only tied my identity even tighter to my performance on the track.

After competing at nationals my senior year, the Longhorn Network shot a special on my teammate and me, and while filming, I went up for a full jump and didn’t land in the pit. Instead, I landed in the box the pole goes into. I had never fallen in the pole vault before. Of course it hurt, but when I got x-rays, they found nothing. I was sore for a few days, but I could walk around and soon returned to training.

The injury continued to bloom over time. It was like a small crack that got worse and worse as I kept training. Since I redshirted the 2011-12 indoor track season, I had one more year of eligibility at my disposal, but as the season approached and my back pain continued to intensify I decided not to compete. I had enough credits to graduate in December and I even had a job waiting for me. So I told my coaches, notified the university of my intention to graduate, accepted the job, and sailed off into my new life.

Except the sailing was anything but smooth.

Lacking a competitive outlet for the first time in my life, I saw that part of me come out in less positive ways. Occasionally, I’d tag along with friends to group workouts, and I convinced myself I had to be the best, the fastest, the strongest in the class. Even out at bars playing Pop-A-Shot, if someone beat me, it was hard for me to have a good time for the rest of the night. I even decided to channel that competitive energy to train for a half marathon, not the smartest plan for someone deal with an unidentified back injury.

Eventually, my body took matters into its own hands. In 2015, a full two years after graduating from college, still in pain but training for the half and running 20 to 30 miles a week, I woke up one morning unable to get out of bed.

Thank goodness my parents live in Austin. I called them, and they took me to the doctor where and MRI showed that I had two bulging discs in my lower back. My nerves were completely wrecked and worn out.

My body was so done with that competitive athlete lifestyle. Not just physically, but mentally, too. I tried to hang on to that for so long, and I tried to apply it in so many different ways but that just wasn’t my course of life. My body literally had to put me down to where I couldn’t walk anymore to be like, this isn’t what you’re going to do. You need to focus on other things and you need to apply your self-esteem and your ego into different areas of life.

As athletes we’re pushed so much and we’re told to be tough and to stick it out and to go that extra mile. That’s something that really stays with you and can make it impossible for you to admit when you’re not feeling well or even just when you’re wrong. You start not even being honest with yourself.

The other thing that happened to me a lot in those early post-track years was my friends and acquaintances would introduce me like this: “This is Natasha. She pole-vaulted in college.”

They were just trying to be nice and say something interesting about me, but it only served to reinforce that being a pole vaulter was the one thing about me that mattered. Who was I without track and field?

Finding the answer to that question has been a process of trial and error. First, I threw myself into my career in motorsport. My first job out of college was hosting a motorsport radio show for ESPN radio here in Austin and that led me into the business side of motorsports where I helped drivers and teams with their marketing and other unique requests. Soon, instead of people introducing me as a pole vaulter, it was “This is Natasha. She works in motorsports.”

I was bitter about how things ended at UT. Being an athlete was the thing that I could bring up or someone could introduce me as that would immediately build rapport with almost anyone. It made me feel important. So without that, I needed a new identifier and my unique career in motorsports was the answer. The temporary fix.

But it turns out that I’m not my sport and I’m not my job either. Yes, there is always going to be something that defines you. That easy identifier that acquaintances will use to introduce you or remember you by. But is that what you take home to yourself every night?

It was for me. For a while.

What made the biggest difference was bringing art back into my life. I have always loved art. It started when I was a toddler. I had so much energy, but my mom figured out if she put crayons in my hand, I was quiet.

Art calms me, bolsters my self-esteem, pushes me outside of my boundaries. I’m not using it as a social identifier to make myself stand out or seem important or interesting. I’m treating this pursuit with a different level of respect.

I also had to give myself permission to grieve for that former identity. Instead of pretending that the end of my track and field career didn’t matter, that I was totally fine, I had to take the time to identify what the sport meant to me, why it was important, and what exactly led to its conclusion.

Track and field gave me a unique perspective on the human spirit. Our bodies don’t last forever. I learned so many lessons while pushing my body to extremes that I still apply today, even though you won’t catch me hurling myself in the air anymore.

Now that I’m more comfortable talking about my struggles with identity after the end of my competitive athletics career, I’m finding that I’m far from alone. I’ve met many former athletes who nod their heads in recognition when I share this story.

And maybe that’s the most important thing. There’s no right way to navigate this transition, and it will never be easy. But if you allow yourself to grieve and be open to who you are, or could be, without your sport, I guarantee there’s something else that will ignite that spark in you.

It comes down to putting one foot in front of the other. Talk about it, throw yourself out there, try new things, and revisit old hobbies or interests. At the end of the day, knowing all the ins and outs of who you are and how you function as a person is the best way to navigate where you place those footsteps.

Natasha Masterson was a member of the University of Texas track & field team from 2009 to 2013. Four times, she earned first team All-Big 12 honors and won the pole vault at the Big 12 Outdoor Championships in 2012. Follow her post-athletics adventures in art and life on Instagram, and check out her wares on Etsy.